Dr Joe Devlin is a Senior Market Analyst at Power NI, specialising in forecasting and the design and evaluation of trading strategies. In this special article Joe looks at whether microgeneration data can help pinpoint the sunniest location in Northern Ireland. 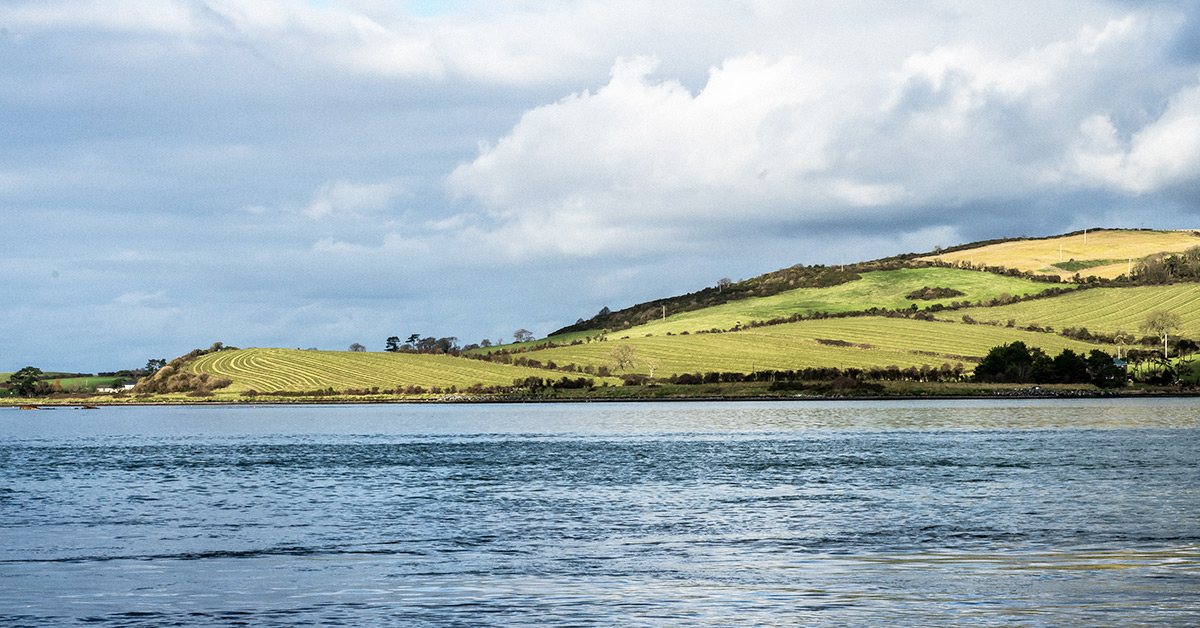 As someone who makes a living from making predictions, I have a somewhat healthy scepticism for forecasters in other fields. Weather forecasting can be an inexact science, but it can also be alarmingly accurate.  As we say a sad goodbye to the sunny weather of summer and look ahead to a wintrier climate, I’ve started to wonder if it’s possible to figure out where the sunniest place in Northern Ireland is.

Enter Power NI’s Microgen team.  At Energia Group we’re committed to ‘democratising’ the grid, and part of that effort involves supporting the installation of behind the meter generating capacity and, in turn, enabling the resulting power to be supplied to the grid. In this way we’re changing the nature of our relationship with the consumer, and indeed encouraging the rise of ‘prosumers’ – those who both produce and consume renewable energy.

At Power NI, we have almost 10,000 small renewable generators signed up to our Microgen tariff. This tariff pays a customer for every unit of electricity they generate but don’t use in their home, in addition to any government payments for the renewable energy generated. These microgenerators are usually solar panels on rooftops, wind turbines or small hydro systems – and they give us an interesting picture as to where surplus power is being generated in the country. 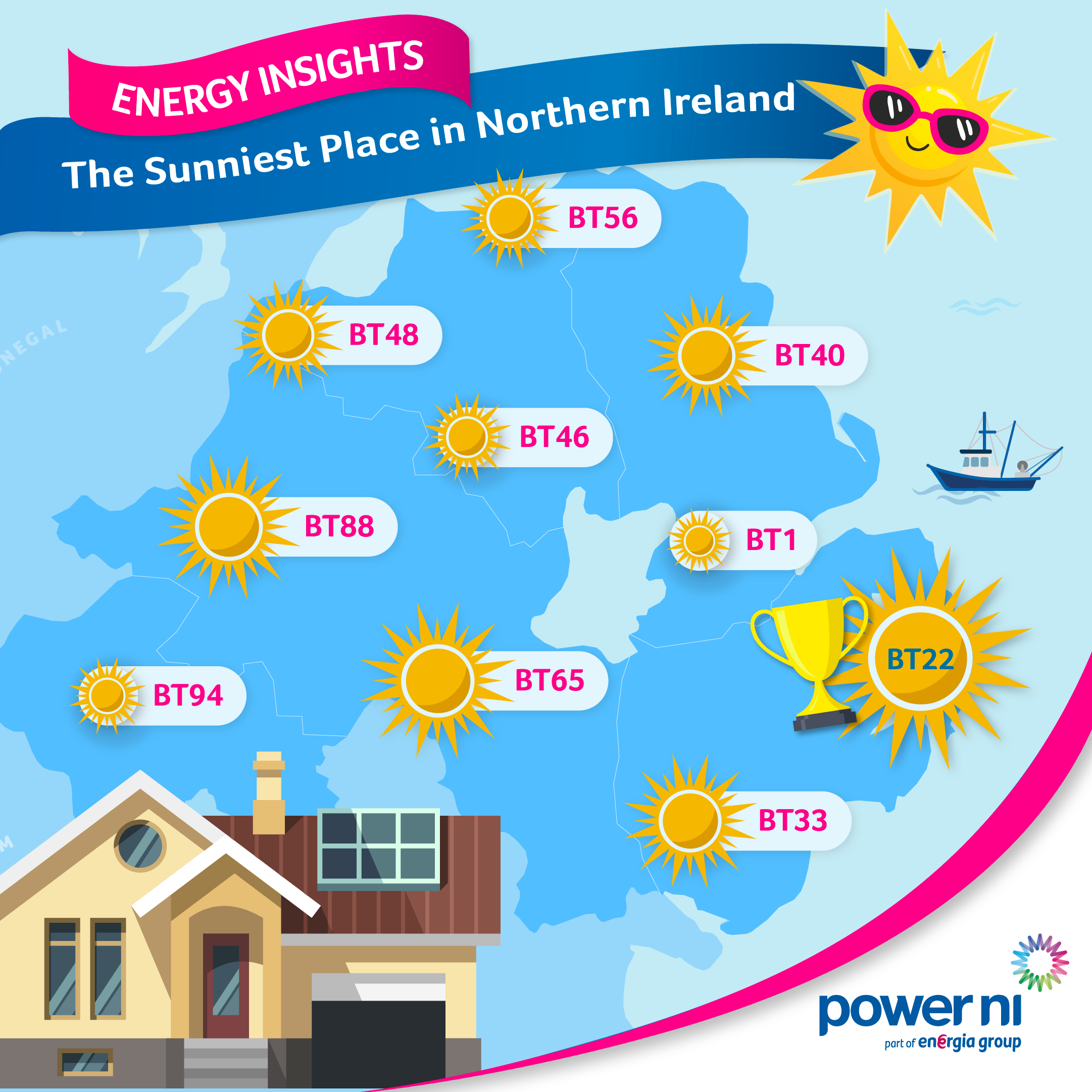 And as an interesting experiment, we can use anonymised generation data for each renewable installation, aggregate it into postcodes, and hopefully establish how much sunlight each part of Northern Ireland gets and therefore where I could go to enjoy the most sunshine!

Our first chart shows how much of the total generation each technology type outputs across each month of the year.  A whopping 72% of the total output of Power NI’s Microgen solar panels happens in the six months between April and September!  Longer days and generally better weather means we get much more out of our solar panels during these months.  Winter is good news if you have a hydro generator and wind doesn’t seem to care what time of year it blows. 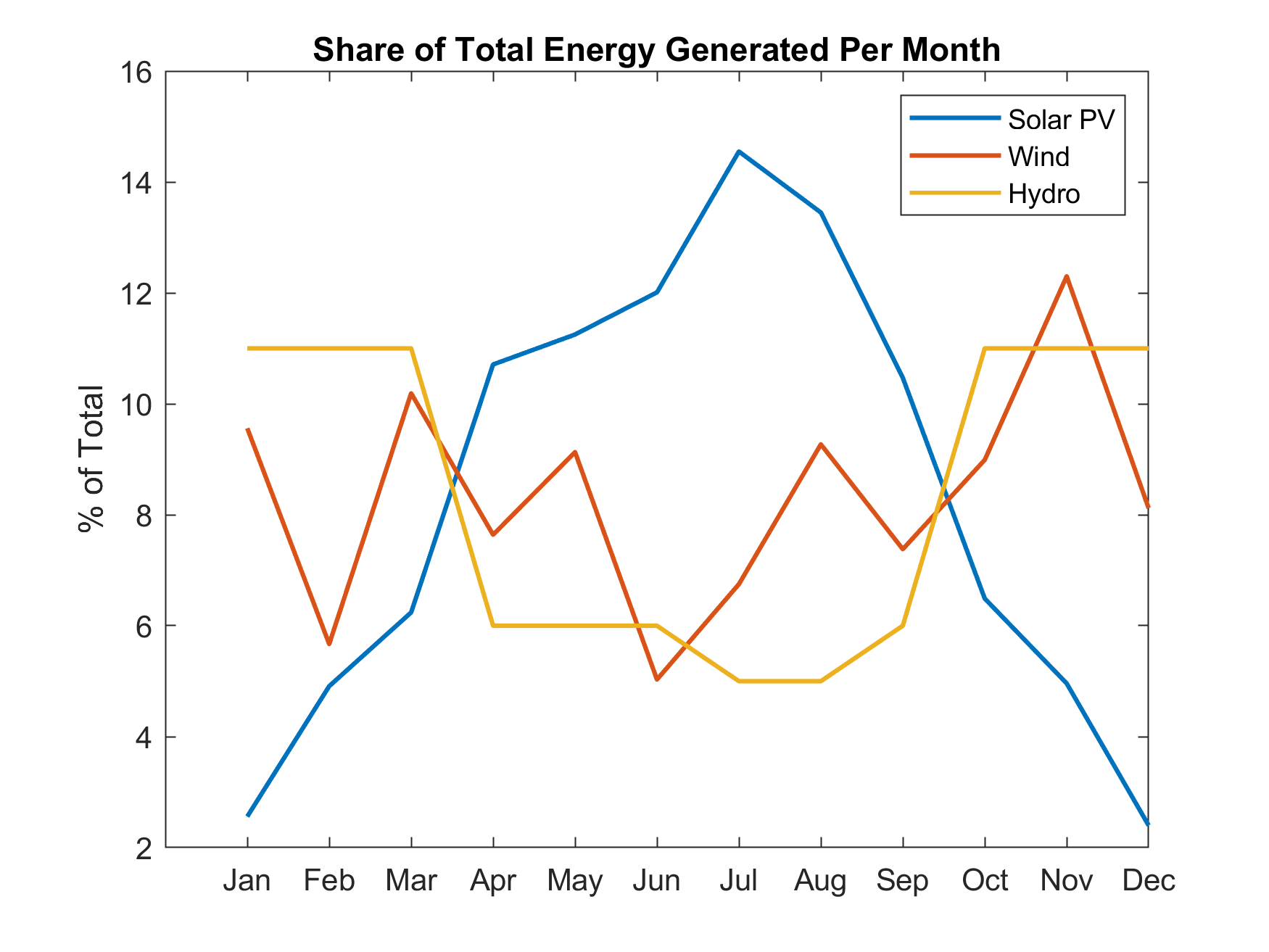 But what about sunshine? OK, I don’t have much chance of packing the bags and finding a year round sunny paradise on these shores, but surely there must be places in Northern Ireland that are sunnier than others, or at least areas which have clearer skies? Here’s the total amount of energy generated by solar panels on the Microgen tariff for each postcode: 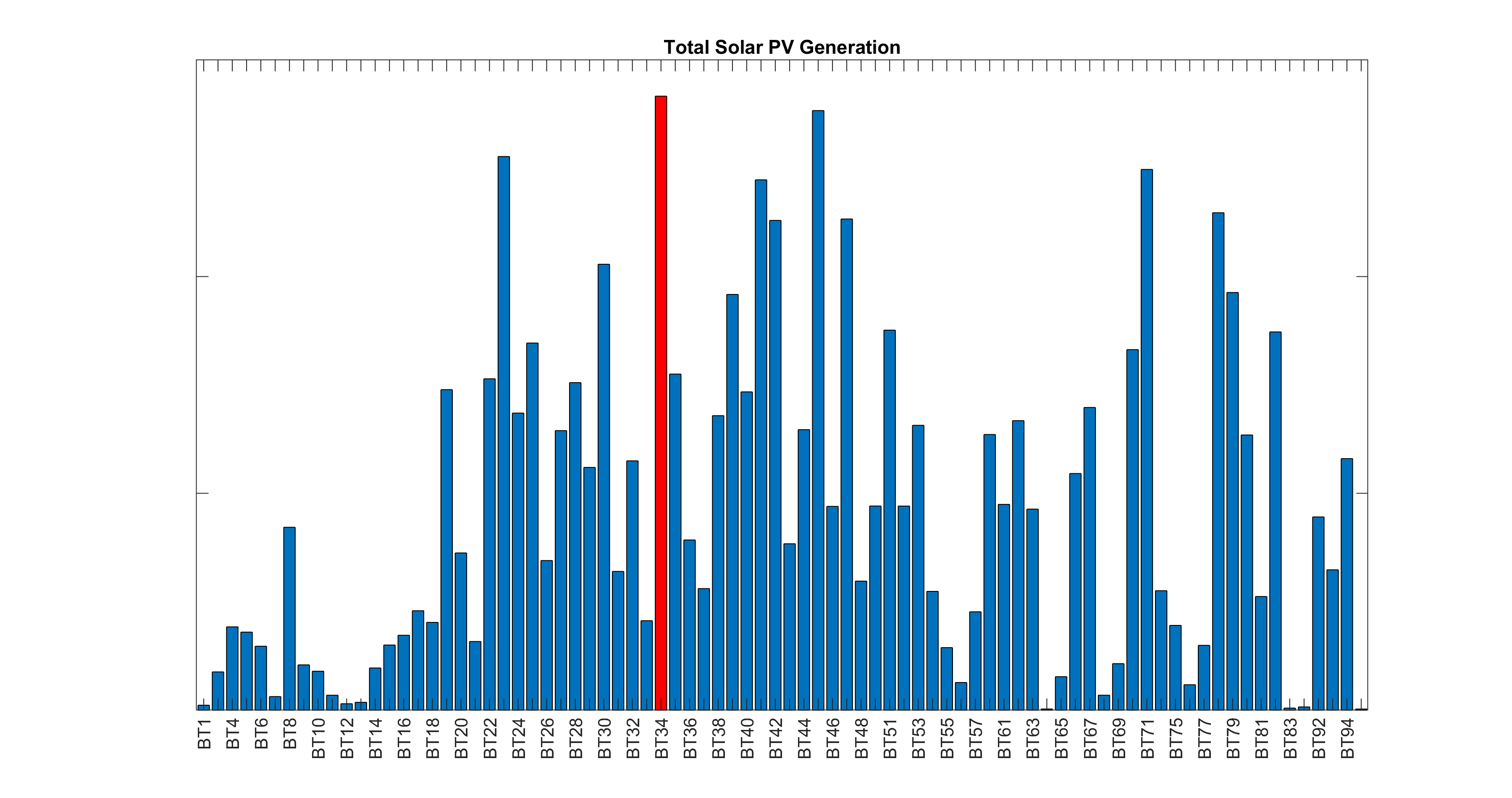 Now we’re talking!  BT34 (Newry and South Down) takes the top spot in Solar PV generation, and just so happens to contain the Mourne Mountains.  Close behind is BT45 (Magherafelt). So why are both these post codes so far in front of everywhere else? Let’s consider the total installed capacity of solar PV in each postcode.  It’s fair to assume that the more solar installations there are, the more generation we will get from that area.  Therefore, the total installed capacity graph should look similar to the total generation graph above.  (Spoiler alert: it does). 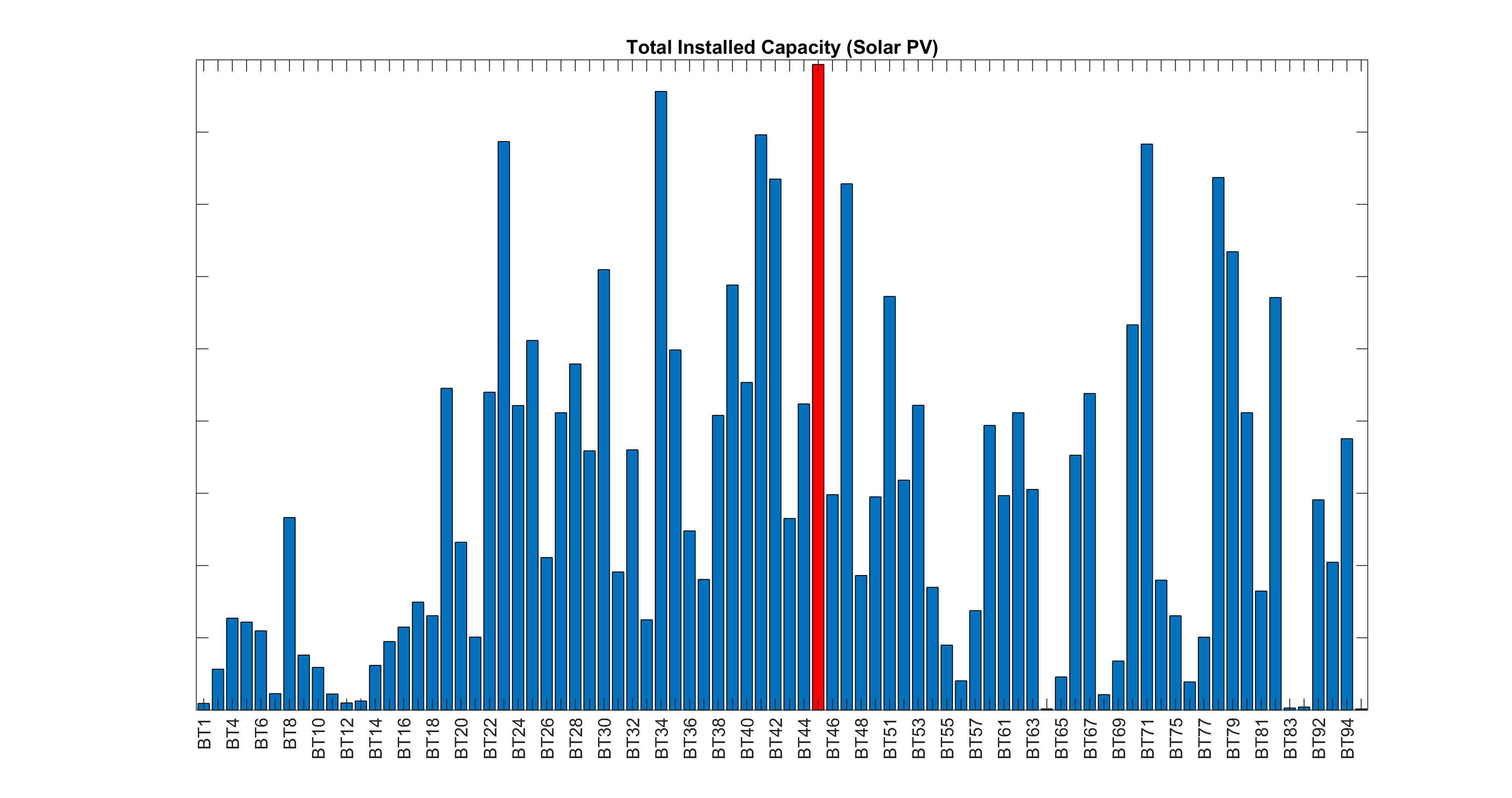 However, there is one big difference:  BT45 has the highest level of installed capacity, but only the second highest output.  The data is telling us something.  We need some way to compare the total solar generation, but also make sure to account for differing levels of installed capacity.  A metric called the ‘capacity factor’ enables us to do just that.

All we do is divide the total energy generated by our solar panels by the total amount of energy these panels could theoretically have produced if the sun shone all day every day, and express it as a percentage.  We can then evaluate the ‘capacity factor’, how effectively a given postcode produces energy, independent of its total capacity.  The higher the capacity factor, the better. 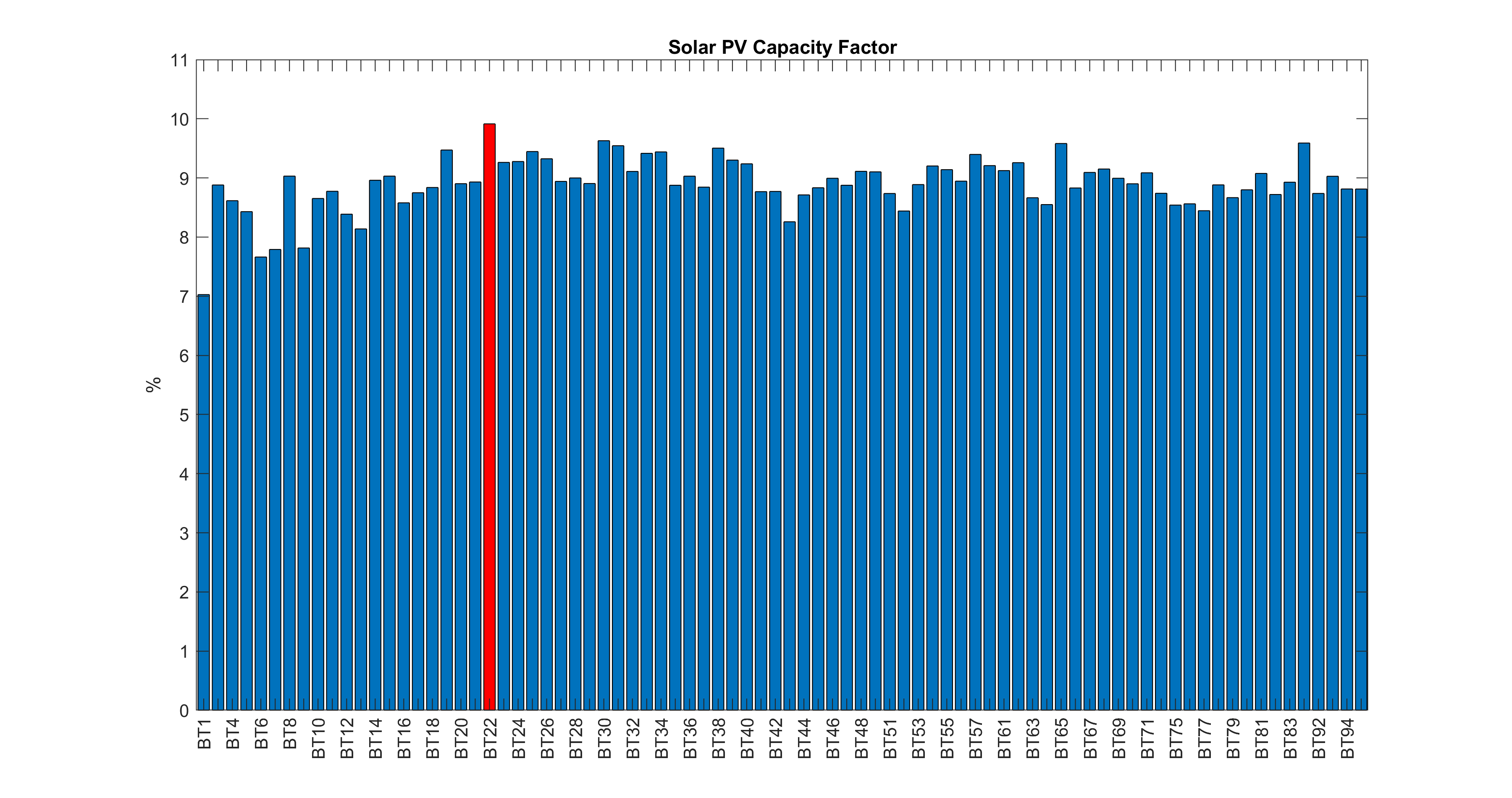 As you might expect, these evens out the spikes and troughs to a great extent. After all, we surely have variations in weather but across Northern Ireland we wouldn’t expect them to be hugely significant.

But there are variations, and the winner is … BT22, home to the Ards Peninsula and Strangford Lough!  Interestingly the lowest capacity factors are in the Belfast area. That may be less due to the weather, but more the number of neighbours everyone has.  More buildings do mean more shadows, after all.  In contrast, panels in BT22 can catch more direct sunlight, driving higher output.

In any case, we are a long way off California capacity factors in the mid-20’s range.  We’ll have to make do with a feed of Portavogie prawns and the memories of sunburn and Soleros!