Energia Group is delighted to take part in STEPs Engineers Week, a celebration of the world of engineering in Ireland which runs from 5-11 March. 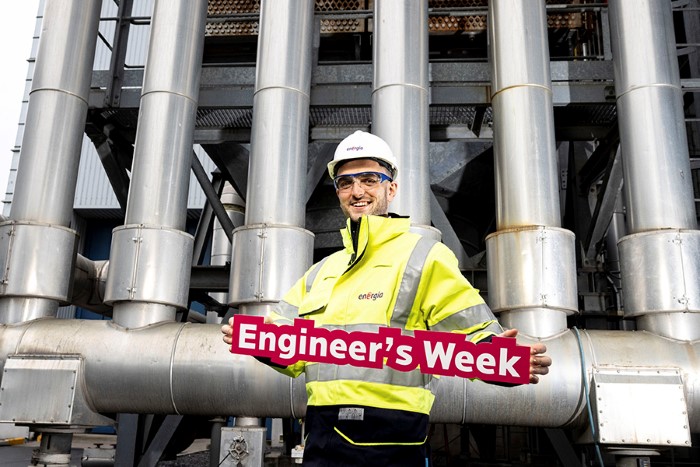 Energia Group is delighted to take part in STEPs Engineers Week, a celebration of the world of engineering in Ireland which runs from 5-11 March. As a leading developer and operator of renewable energy across the island of Ireland we are proud to be profiling some of our team working on projects critical to Ireland achieving its climate action targets.

Gavin Hickey is Energia Group’s Development Engineer. Speaking about his role he said, “I work on a variety of projects that have the potential to play a critical role in the decarbonisation of Ireland’s energy sector and to the country’s overall transition to net zero.

These projects include zero carbon solutions for the transport sector, flexible power generation and battery storage projects that can provide security of supply when the wind isn’t blowing.

Following his graduation from University College Dublin with a degree in Engineering Science and a Masters in Engineering, Gavin joined Energia Group as a Graduate Engineer in 2016. Speaking about his career to date Gavin said, “I am incredibly fortunate work alongside leading Engineers and teams of technical experts on projects that will help to deliver on Ireland’s climate action targets by decarbonising our energy supply. I have worked in a number of different roles in the company including the delivery of energy efficiency solutions for Energia’s residential and commercial customers.”

He added, “One of the most exciting projects I have been involved in was the development of the residential demand side response platform which used frequency signals from the grid to trigger batteries installed in people’s homes to start exporting electricity to the grid. This was a small scale pilot project using very small volumes of electricity but it proved that in the future our homes and appliances could play a role in the transition to a zero-carbon energy system.”

Gavin has always had an interest in energy and the important role that decarbonising the energy supply system has in terms of limiting the impacts of climate change which was why he was delighted to be invited to speak at COP26 about the Northern Ireland Green Seas project, a project that will play a crucial role in identifying the next generation of innovative technologies and solutions that will help to reduce greenhouse gas emissions in maritime operations and shipping.

Sharing his advice to young people considering a career in engineering, Gavin, a member of Engineer’s Ireland and MBA candidate said, “If you are curious about how things work and have an interest in overcoming challenges such as climate change then delivering projects that can improve our environment and quality of life could be for you! I love to solve problems and innovate to bring projects from concept to design, construction and operation. Being an Engineer allows me to play a part in solving real-world problems.”