Gone With The Wind: Why Electricity Prices Change With the Weather

In his latest blog, Dr Joe Devlin shares his understanding of how Ireland’s windy weather affects our electricity prices. 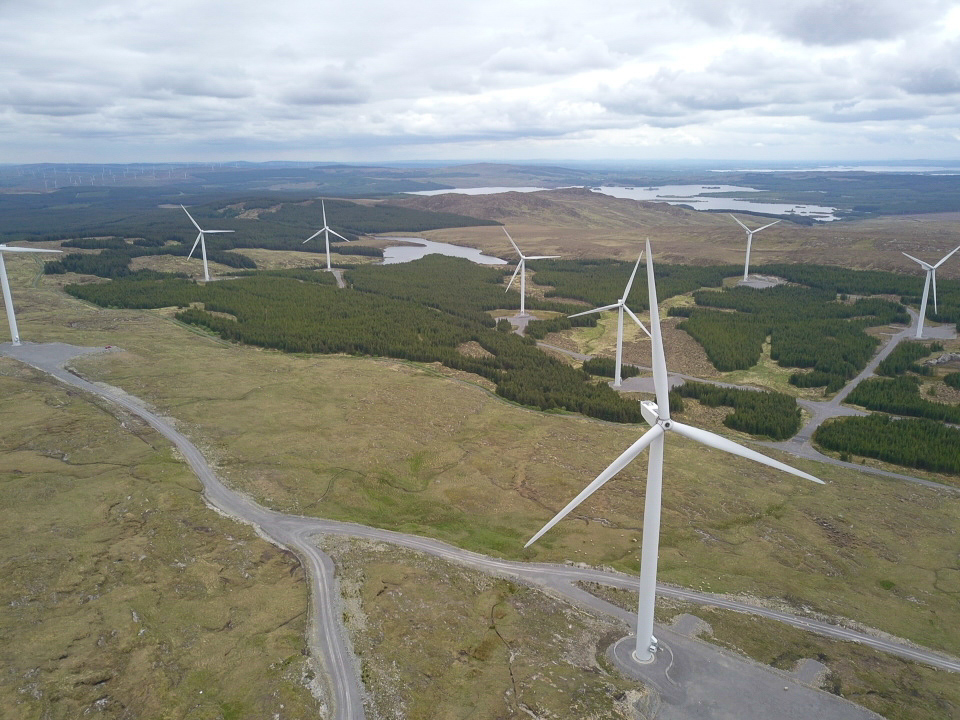 We were successful in identifying where the sunniest place in Northern Ireland was in a previous blog post. But, today’s post is about how the weather and the electricity market are very closely interlinked. The Island of Ireland is a pretty windy place, so it’s not surprising that we’ve harnessed this natural resource and turned that wind into green electricity at breakneck speed! 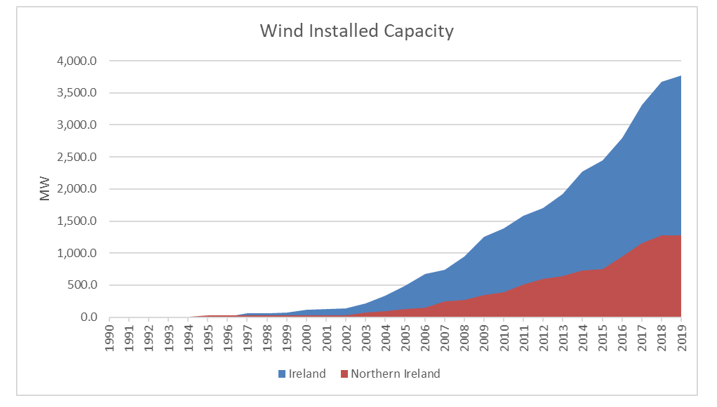 Generating all this electricity from wind is great, but the story doesn’t end there. Just like any other product or commodity, the electricity generated from wind turbines needs to be sold to somebody before it makes its way to your kettle.

Suppliers such as Power NI and Energia buy power on behalf of retail customers on the wholesale electricity market. Ours is called the Single Electricity Market (SEM) (single because it covers both Northern Ireland and the Republic of Ireland, not because it’s on Tinder). Generators over a certain size also enter the market to sell the electricity they produce.

A wind turbine creates electricity when its blades turn- i.e. when the wind blows. Compare this with a gas fired power plant which needs to spend money on fuel (and carbon allowances) in order to essentially do the same thing: turn a shaft to produce electricity.

Say we own a wind turbine. It costs me £0 of fuel to generate a unit of electricity. Therefore, I can sell this power cheaper than any fossil fuelled plant since they generally have to recover their production cost i.e. their fuel and things like carbon allowances.

So energy suppliers like Power NI and Energia will enter the market to buy electricity for their customers to consume tomorrow between 5-6pm based on their trading strategies, demand forecasts and how much they are willing to pay. All other suppliers active in the market will do the same, and for the sake of argument we’ll say that the sum of all buy orders for the period adds up to 5,000 MW.

Energy generators like wind farms and power plants will also enter the market. They will say how much power they would like to produce and at what price they would be willing to sell it at.

For this illustrative example, let’s assume that electricity suppliers are willing to pay any price just to satisfy their customers need for power. Let’s also assume that every generator is willing to sell their power at the price it costs them to generate it (this is known as their short run marginal cost and is a sign of a competitive, efficient market). Finally, 1,000 MW of wind is forecast to turn up between 5-6pm tomorrow, and all of it enters the market.

Let’s have a look at our market. Suppliers want to buy 5,000MW. There are more than enough generators to meet this demand, but which ones actually get to supply power? It all comes down to price. The cheapest generators are the ones chosen to provide the 5,000MW. The ranking of cheapest generator to most expensive is called the “merit order”. We simply stack up all the offers to generate from each unit and sort them from lowest price to highest. The market price is then set by the last unit in the merit order which fulfils the demand requirement, in this case 5,000MW.

Here’s how the merit order looks for our example: 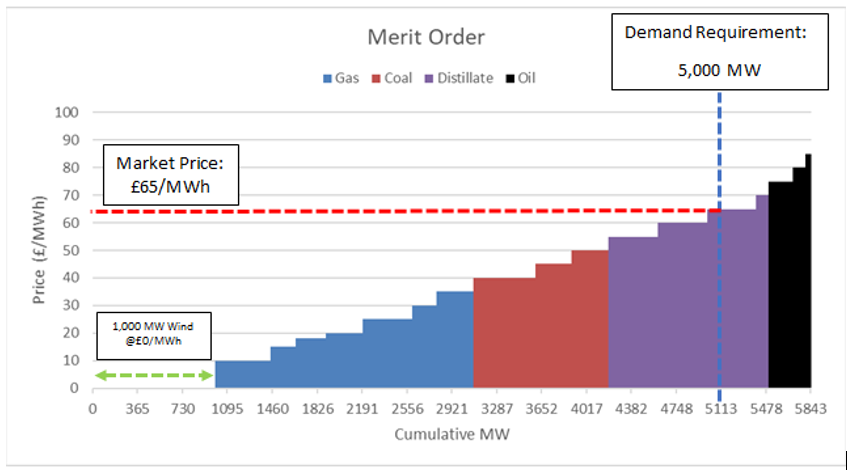 Given that suppliers need to procure 5,000MW, we draw a vertical line at this point. The market does not need any more power, and the last unit in before the 5,000MW cut off is known as the marginal unit. In this example, the marginal unit set the price at £65/MWh. This is the price everyone who is in merit (i.e. below 5,000MW in the merit order) gets paid. This means our fictional wind turbine has been able to enter the market with a price of £0/MWh but receives £65/MWh for its output just like any other generator, enabling them to pay for the turbine and maintenance over the long term.

But imagine in two days time the demand requirement is again 5,000MW but only 500MW of wind is forecast to turn up? Well, the merit order shifts and more expensive generators are required to satisfy the same demand. In this example, the price increases to £75/MWh! 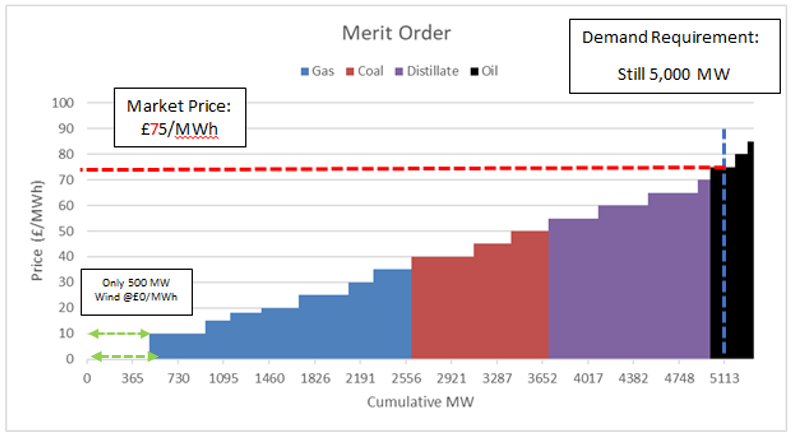 This is called the merit order effect and illustrates how wind (well, any zero short run marginal cost source really) has the ability to significantly reduce power prices in the wholesale market!

As the installed capacity of wind continues to grow and grid scale solar development kicks off, weather based downward pressure on power prices will continue. We at Energia Group will be investing €3bn to continue to drive towards a low carbon energy system. The merit order effect is an added bonus: clean, green and cheap power for everyone!