Northern Ireland can be a global leader in hydrogen energy – Dodds

Economy Minister Diane Dodds today said the time is right for Northern Ireland to explore the development of a local hydrogen economy.

Northern Ireland can be a global leader in hydrogen energy – Dodds

Economy Minister Diane Dodds today said the time is right for Northern Ireland to explore the development of a local hydrogen economy.

Speaking after meeting with some of Northern Ireland’s leading players in the hydrogen space, the Minister said hydrogen will create the opportunity for new sustainable jobs that in turn will underpin zero carbon economic growth. 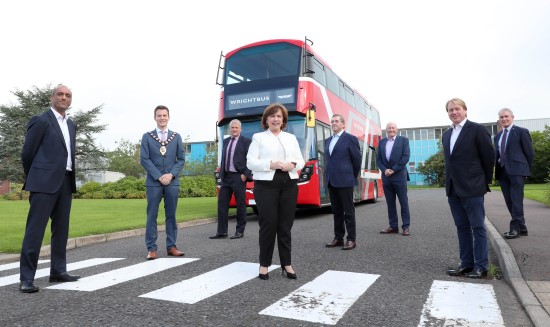 She said: “Northern Ireland has the potential to develop an enviable reputation in the global hydrogen economy with our indigenous wind resources and local talent with a proven track record in innovation.”

Bamford Bus is this year delivering new buses to Translink with hydrogen-fuel cells powered by green hydrogen produced from a local Energia wind farm. Forecasts indicate that future growth in demand for hydrogen-fuelled buses and other hydrogen-fuelled transport will grow rapidly.

Electrolysers are central to all green hydrogen projects and a new joint venture between CPH2 and B9 Energy plans to manufacture a patented 'membrane free' version in Northern Ireland for worldwide distribution.

Electrolysis utilising the valuable wind resource, especially at times of the day when there is lower electricity demand, produces oxygen which is valuable, for example, for NI Water in its waste water treatment plants, and green hydrogen which can be a valuable zero carbon energy resource for transport now, and eventually for heating.

She said: “Northern Ireland has a valuable indigenous source of energy – wind. We are a market leader in renewable electricity generation – 48% of the electricity we generated over the past year was from renewable sources. We lead the way in engineering solutions to get as much of this wind generation as possible onto our electricity network. In both cases we are doing better than anywhere else in the world. The opportunity is there for us to take.

“With the global demand for electrolysers set to soar, my vision is that we will create the world’s largest manufacturing base for electrolysers. This will leverage Northern Ireland’s expertise in advanced materials handling and engineering and create hundreds of direct sustainable jobs, with thousands in the supply chain. It will provide a lasting legacy from the challenge of taming climate change.”